The island of the Knights has many wonders to behold and uncover throughout its expanse. The diversity of Rhodes spreads from the imposing and medieval Old Town in the center of the city, to the grandeur of Kallithea Springs and the natural habitat of the Valley of Butterflies and goes on and on. In the South parts of Rhodes, discover some enchanting sceneries that will stay in your mind forever!

In the southern part of Rhodes (90 kilometers from Rhodes town) there is a small islet which during low tide turns into a peninsula. The view from the beaches is astonishing and offers a cinematic scenery of the Aegean, the Mediterranean Sea and the mountains surrounding the area. Experienced windsurfers and kitesurfers or first-timers that want to try something different, will greatly enjoy the windy weather! If you prefer less wind, then the eastern side will be preferable for you. The beaches are ideal both for children and grownups because of the golden smooth sand and the shallow waters. 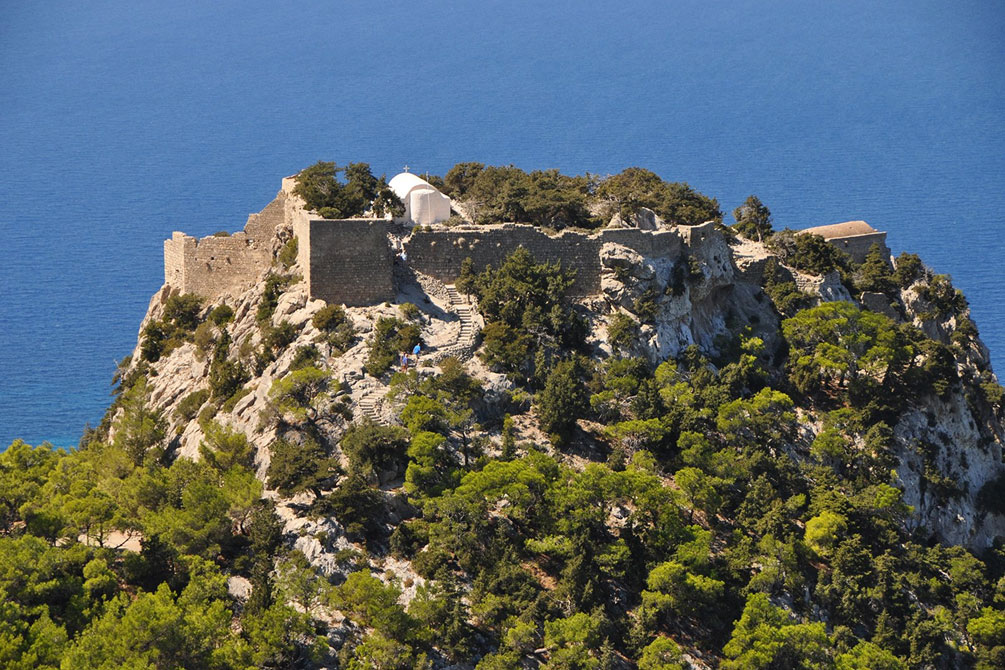 70 kilometers southwest of Rhodes town, lies a quaint little village called Monolithos which means a big rock that consists only of a piece. High up in a 300 feet rock above the village, is a Venetian Castle which was built in 1480 and protected the citizens from enemy and pirate attacks. Nowadays, you will only get to see the ruins, as well as a chapel that is dedicated to Saint Panteleimon. The castle is accessible by a narrow path and a staircase full of steps that are quite slippery. This place has extraordinary views of the sea and of the verdant hill.

Below Monolithos you will come across a secluded and peaceful pebbled beach full of wild elements of nature. There is a boulder, the waves are splashing on rocks and the hills are covered in greenery. Since it is not an organized beach, it is advisable to pack your own food and drinks and bring an umbrella to protect yourself from the sunrays. You may find a rock that has ancient carvings that resemble baths. These, according to historians, were build and were exclusively used by the noblemen.

A picturesque village with pastoral views, traditional brick houses, a folklore museum, bread ovens and a remarkable Byzantine church from 1060! There is, also, a track leading to a stunning Medieval ruined castle that offers a panoramic view of the village, the sea, and a tranquil feeling to all we witness it! What stands out is that Asklipio is not developed for tourists, but still remains faithful to its classical architecture and preserves intact all of its breathtaking lush and rocky surroundings. Despite its size, it has a large population and they will be happy to accommodate you. 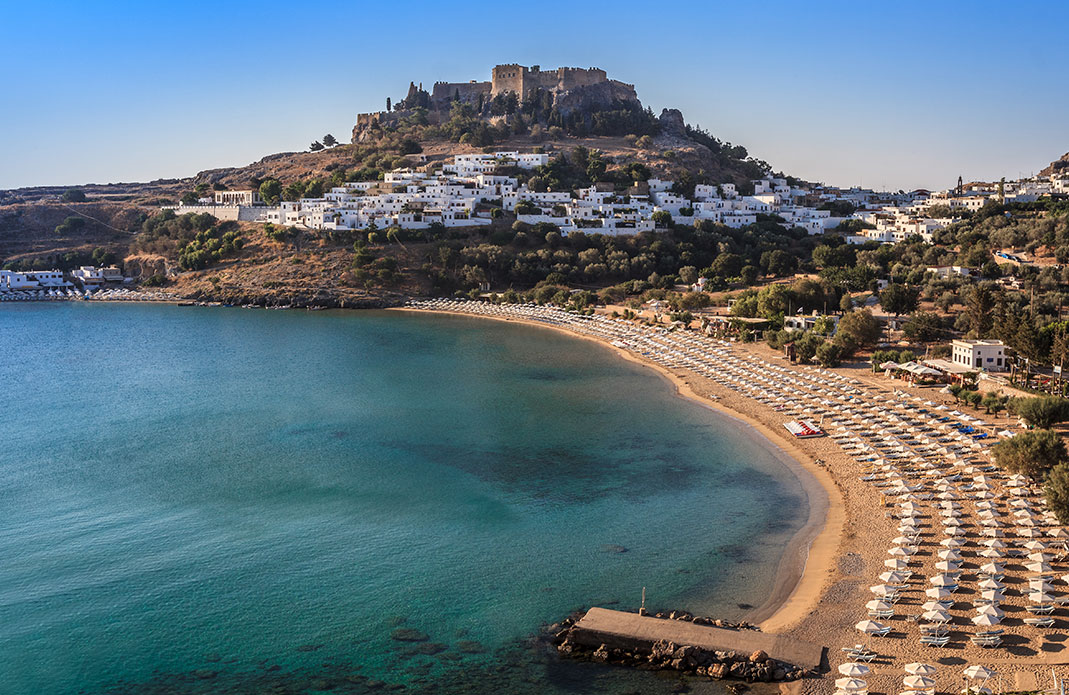 Located 47 kilometers from the city center is both a village and an archaeological site of great importance to the island. Here you will get to admire 5000 years’ worth of history starting from the castle of the Acropolis and the fortifications. Inside them you will see remnants of Ancient Greek temples, a Hellenistic stoa, an Orthodox church and more. The landscape is enchanting and captivating as it incorporates the white flat-roofed houses, shallow sandy beaches, and the bluest waters! 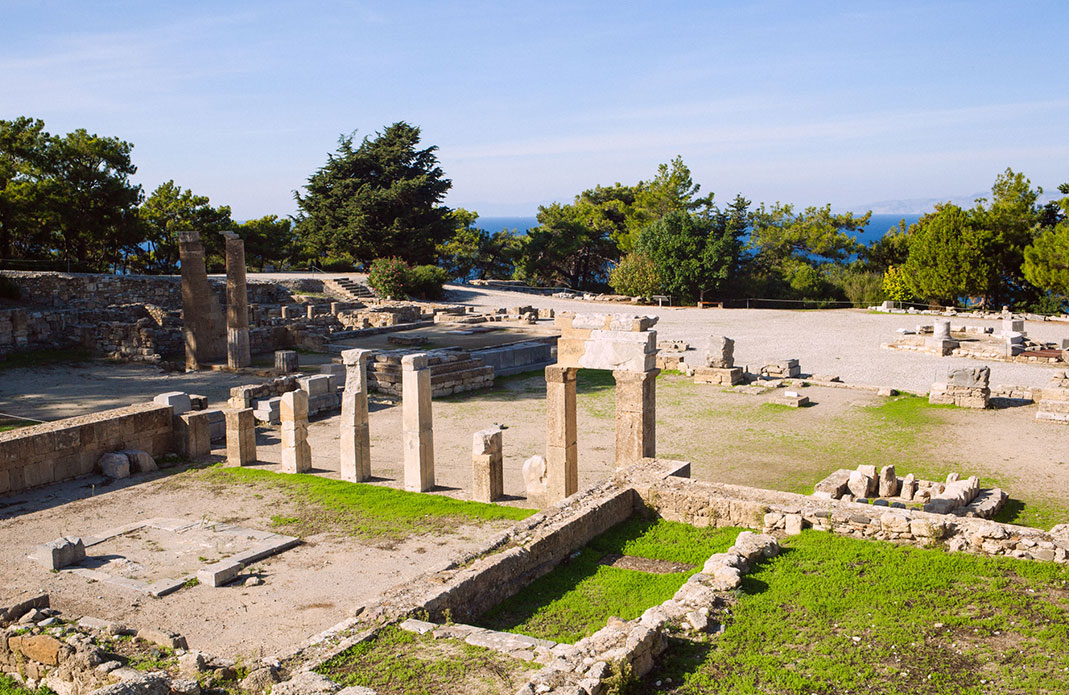 Close to the promontory of Agios Minas is one of Rhodes’ oldest cities, Kamiros. It was established by the Dorians, but its first citizens were Achaeans. Along with Ialysos and Lindos, they created a powerful city in the 5th century B.C. called Rhodes. It knew its golden era around the 6th century, however gradually it fell into decline, after its residents started moving to the city of Rhodes in 408 B.C. In the 9th century B.C., the sanctuary of Athena and later on a temple dedicated to her was built. The entire area is encircled by pine trees and from the hillside one can catch a sight of the blue Aegean Sea.

South Rhodes is the part of the island that is worth exploring for its unique, contrasting terrain, the historical sights, and the hospitality of its people! With the right planning, you may catch up and visit all these places in two-three days. Just grab a map and start your adventure as soon as possible!